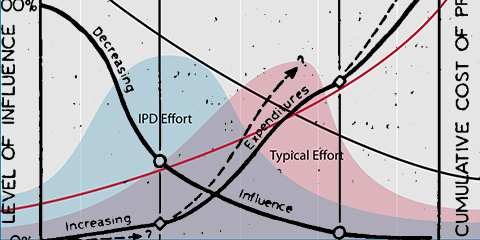 Update: The argument in this blogpost appears with better graphs and more context in chapter two of my PhD thesis.

I have begun writing my PhD, which is simultaneously daunting and invigorating. Central to my writing at the moment is the question of why we want flexible representations, why architects need parametric models.

In 2004, Patrick MacLeamy drew a set of curves based on a pretty self-evident observation: an architectural project becomes more difficult to change the more developed it becomes. For this earth-shattering revelation MacLeamy named the curve after himself (although the title should probably go to Boyd Paulson who drew the curve much earlier [see Noel’s comment to this post]). You have probably seen the graph before. It gets trotted out in every slide deck promoting BIM / IPD / or early-stage environmental analysis.  The key point is that architects expel their effort at a time when design changes are relatively costly. MacLeamy and his disciples advocate shifting design effort forward in the project, frontloading it, in order to reduce the cost of design changes.

MacLeamy would argue that shifting design effort forwards is for the benefit of design [via youtube]. However, the portfolio of buildings the architecture firm HOK has designed with MacLeamy as CEO is decidedly uninspiring. MacLeamy’s real design position is indicated by his choice to measure design changes in terms of cost since most designers would perceive their decisions as adding value to a project. Further, the shift in effort assumes the design process can be anticipated, and the design problem can be known before the design commences. But we have seen this curve before…

28 years prior to MacLeamy, Barry Boehm drew a curve based on a pretty self-evident observation: a software project becomes more difficult to change the more developed it becomes. For this earth-shattering revelation Boehm named the curve after himself. It is pretty striking how similar the curves are, both in shape and even in what the axes signify. Boehm’s curve is often used by software architects to justify upfront design – much like MacLeamy’s curve is in architecture. However Boehm’s curve has been challenged…

In his book ‘Extreme Programming Explained’ (1999) Beck drew a radically different version of Boehm’s curve where cost approaches a horizontal rather than vertical asymptote. It is an audacious idea, but Beck thought it could be achieved by changing the culture of programming, moving away from up-front design and towards continuous design supported by a new generation of programming tools. 12 years later, we see evidence of Beck’s curve manifesting. One example is Facebook, which somehow manages to run co-current versions, while they integrate new features, while changing the underlying infrastructure, while half a billion people visit the site, and all the changes happen on the fly, at a rapid pace,  with no downtime. It would be like the designers of Boeing designing and changing the plane while it was flying. If Boehm’s curve held true, the existing Facebook codebase would be growing exponentially more costly to change, slowing the rate of change. Instead, we see something resembling Beck’s curve where the rate of change remains steady.

Beck’s curve would never work in an architectural context because architecture, unlike software, is very difficult to change once it is constructed (although some cradle-to-cradle people might disagree with this). Significantly for architects, Beck’s curve demonstrates the location of our design efforts do not need to be controlled by the cost curve. Instead, using new design tools and a new design culture, we can control the cost curve to suit our design efforts. So I propose another graph…

This graph is based on the pretty self-evident observation: an architectural project is difficult to change once it is built but using flexible modelling tools, designers can delay finalising decisions until right before the moment of construction. For this earth-shattering revelation I have named the curve after myself. The curve is aspirational rather than reality since parametric modelling in contemporary practice still requires significant frontloading and still frequently encounters moments of inflexibility. The curve appears to be amplified by particular architectural typologies and for a few categories of problems, notably patterns and panels, the curve already exists. As parametric models become more supple, I think there is a possibility this curve could manifest on a wider range of design problems. You heard it here first.

I also note that while I have drawn this curve in terms of cost (to aid comparison with MacLeamy’s curve) I think it is better stated in terms of flexibility. Cost is a measure of the designer’s capacity to make a change, the designer’s ability to design. Designers have more capacity to make change on a flexible model, while at the other end of the spectrum the designer has very little influence over a brittle model. Being able to change the design empowers the designer to explore the solution space, to reconsider the design problem and to respond when forces outside their control influence the project. While there is a cost associated with changing a design, flexibility aims to lower this cost by making designs more susceptible to change. That is why architects need flexible representations, why architects need parametric models.

25 October 2011: Another version of the graph based on suggestions in the comments. Perhaps we can call this one the Regnier curve 🙂

10 April 2012: Thanks to Noel in the comments, I have tracked the first instance of the MacLeamy curve down to a publication by Boyd Paulson in 1976: Paulson, Boyd C. 1976. “Designing to Reduce Construction Costs.” Journal of the Construction Division 102 (4): 587-592. Coincidentally Barry Boehm published his curve in the same year – but I am unsure if either author knew of the other.