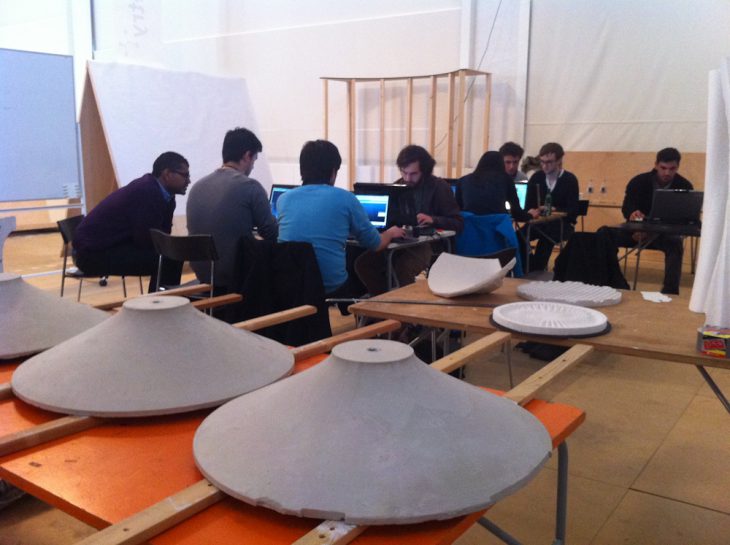 By now every man, dog and archinet, has taken the Smart Geometry website and condensed it into a blog post. In this post I want to share some of the larger trends emerging from Smart Geometry – not explicitly spoken about on the website.

The rise of the amateur

By and large, most of the interesting stuff presented at Smart Geometry was done, not by people in architecture offices, not by people in academic institutions, but by people in their spare time – Kangaroo, Karamba, Open Cascade, along with others. This fits with a more general trend in the digital space, where everything is becoming cheaper and as a result  it is cheaper to fail while success is virally transmitted.

It is kind of funny that the architecture industry, with all of its enormity, money and importance, is being pushed forward by a very small group of amatures noodling around in their spare time, for nothing other than the love of making something. It is how I imagine physics to be done in the 17th century, everyone just having a go in their spare time and reporting back to the Royal Society that they know how gravity works. Academic institutions should find this very troubling. It is probably the subject of another blog-post, but I think these early Smart Geometry amateurs are indicative that the academic institutions are struggling to find relevancy in this field. The institutional bureaucracy of most universities is well equipped to slowly turn out papers on Deleuze  but ill-equipped to produce, and measure the value of, the type of inovation that is happening today. There are parallels between the academic industry and the recording industry. Perhaps, like in music, we are going to see more of these amateurs (or independent researches) who like independent artists, will survive by touring (consulting and tutoring) and selling their ideas directly to the end user, cutting the institution out of the deal.

Walking around Smart Geometry it was very obvious what everyone was using:

Generative Components would sit somewhere near the bottom of that list, behind Digital Project. It must have been a little disheartening for the developers of Generative Components, to have paid all this money for a conference and to see everyone voluntarily using a rivals product. It almost felt rude, like everyone had shown up to a party and drank the host’s beer without talking to them. Conspicuously absent from this party, probably by design, was anyone from Autodesk or McNeel. I was surprised by how distinct the preference for Grasshopper and Processing was, especially considering that both products have some pretty reasonable alternatives, and that their dominance is only a recent phenomena. For both Grasshopper and Processing, it seems to be the community of developers (the amateurs) extending the product that is making it useful. The irony is that neither Grasshopper nor Processing seem to do much to elicit this community support, while Generative Components, who is quite active in the community, has failed to capture it in any meaningful way.

Having said that, Bentley demoed the new version of Generative Components, and thankfully they seem to be trying to innovate their way out of the current predicament. It is not too clear in the image, but in the new version you can define the input and output parameters of a node from a dropdown list. So rather than having a huge list of different node types (a line from points, and line from vector ect.) you have one node type (a line) and then specify how that node is to be constructed and what data you want back from it. Not earth shattering, but these small progressions in GH and GC, along with the gradual redefinition of a researcher is enough to get a room full of 150 geeks excited, and hopefully push everyone forward.